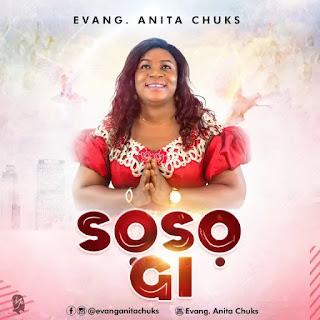 Nigerian fast rising Gospel Musician and Minstrel Evang. Anita Chuks (F.K.A Evang. Anita Igbkwe) finally dishes out her much anticipated song “Soso Gi” coupled with a beautiful visual.
Speaking about the song, she said “Soso gi meaning only you, only God we know. This a song of assurance of God’s love and protection, that even in the midst of Covid-19, chaos, temptations and trials we are assured of his protection and immunity, nothing will happen to us because we don’t have any other God beside him. The song came through my 3rd song, a boy of 10year. Soso chukwu ka anyi ma.
Evang. Anita Chuks is a dedicated and talented minstrel who is Based in Lagos, She has recorded and released several songs which is still blessing lives at the moment one of which is “Call Him God” which was released earlier this year.
Soso Gi was released from her forthcoming album named “Encounter” which is set for release later this year. The song was produced by Starstud Studio while the Video was directed and shot by Kingdomboiz Media.
STREAM/DOWNLOAD BELOW
https://evanganitavhuks.fanlink.to/sosogi
Watch Video Below
Connect With Evang. Anita Chuks:
Facebook: Evang Anita Chuks
YouTube: Evang Anita Chuks
Instagram: @evanganitachuks
CONNECT WITH GOSPELPHASE NG
Call/WhatsApp: +2347041888096
Follow us on all our social media handles
Facebook || Twitter || Instagram

ALBUM: Dusin Oyekan – The Gospel Of The Kingdom