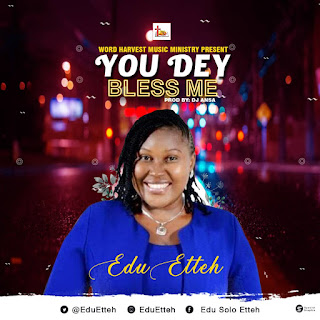 Edu Etteh renders a brand new song of praise and appreciation titled You Dey Bless Me produced by Dj Ansa
The mid tempo cultural praise jam is a blend of English and the Ibibio dialect which Edu Etteh perfectly fuses in together to offer praises and gratitude to God Almighty
Stream, Download and Stream Below!

Download Mp3
About Edu Etteh
Pastor Edu Etteh is a dedicated worshipper of God committed to raising an altar for the worship of God in every nation of the earth. Born on the 18th of April,1988 to the family of Late Collins Uye of Urue Offong Oruko Local Government Area of Akwa Ibom State began singing at the age of 6. She moved on through the children’s choir to the youth choir and so on. Faithfully she’s been singing the praise of God till date. She is married to Apostle Solomon Etteh and together they are pastoring The Word Harvest Christian Centre here in Uyo Akwa Ibom State. The marriage is blessed with two children, Princess Praise and Prince Solomon Etteh. She believes the best is yet to come as she continues to lift up the name of Jesus.
For bookings and orders contact:
08160217081
CONNECT WITH GOSPELPHASE NG
Call/WhatsApp: +2347041888096
Follow us on all our social media handles
Facebook || Twitter || Instagram

ALBUM: Dusin Oyekan – The Gospel Of The Kingdom