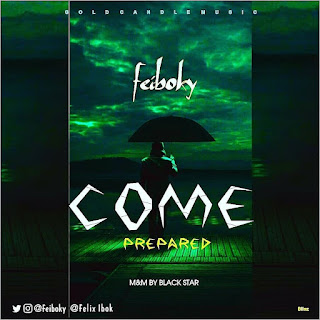 In his words, Feiboky said
…And I saw the dead, small and great, stand before God; and the books were opened: and another book was opened, which is the book of life: and the dead were judged out of those things which were written in the books, according to their works.
And the sea gave up the dead which were in it; and death and hell delivered up the dead which were in them: and they were judged every man according to their works…
And whosoever was not found written in the book of life was cast into the lake of fire.
Revelation 20.

Solo Intro
What do you…
Wanna see…
Me become, one day?
One day!
And what are you…
Trying to be showing me…
To see, always…
From this young age?

Verse
Uh!
Everybody in my city says they’re better than another.
Each and everyday, rappers telling me how to pull the trigger.
Jump in the booth and become a super star.
They say you’ve gotta fake it till you make it, go broke tryna be looking fly.
You can be another super model maam.
Just go mad, twerk naked and place it on YouTube and Instagram.
You’ll be connected with video makers.
And they be combing the country, looking for some real gifted booty shakers.
Government says the industry is developing.
So we need more sex on television for our children.
And I promise, you wanna flaunt, if you know you got it,
Busty, curvy and seductive, you ain’t tryna hide it.
Your country is tryna catch up with the rest of the nations.
One world and I’m talking of legal fornication.
So play your part and be certain to be rewarded for it.
Dance track and a couple of whores to be twerking on it.

You don’t wanna waste away into the pew.
Like me and my crew and nobody here is worshipping you.
When the club has got enough and to spare shawties to offer you?
Bottles over bottles and right strippers to shagger you?
And instead of the church coming together, what do I see?
One ministry fighting to gather every member.
But I ain’t here for that though, you might already know.
Wherever you’re placed, I believe you know what Christ wants from you.

As clear as I can see, she never getting better.
This country? I hope you’re not thinking she can’t be greater?
Man I ain’t saying your boys are not gonna eat.
What I mean when I say your kids had long turned into beasts?
What you gonna do, when they’ll be coming at you?
The storms you’re bouta reap from the whirlwind that you sowed?
Advertising pornography? Stifling the Bible?
Following democracy and bowing for idols?
So God is talking but everybody is only scoffing?
But I’m looking around the world, each man’s got a coffin.
And you’re carried out of the zone and placed before The Throne.
Stark naked homie, and then you’re completely on your own.
And I promise you, ain’t nobody wanna be over there.
You’d be tryna hide from what you carry over there from here.
Everything we ever tryda show you in the movies And tell you in the musical forms and you were refusing then.

They say it’s over when you die, but somebody lied.
And I ain’t tryna make you pay for what you wouldn’t buy.
All I mean is that as you’re out there sinning and grinning,
God is tryna tell you “I am the end and the beginning!”.